Pillar Focus Apostles Creed: He suffered under Pontius Pilate, was crucified, died, and was buried

What were the accusations by which Jesus was condemned to death? Some of the leaders of Israel accused Jesus of acting against the law, the temple in Jerusalem, and in particular against faith in the one God because he proclaimed himself to be the Son of God. For this reason they handed him over to Pilate so that he might condemn him to death (CCCC 113).
The greatest of these accusations against Jesus (then and now) was his claim to divinity. Throughout the Gospels, Jesus consistently acted and spoke in the very person of God. Consider the following points from Peter Kreeft's book: Handbook of Catholic Apologetics: Reasoned Answers to Questions of Faith.
(these five points are from Kreeft's book, p150-151)
Also see the Catechism, paragraphs 589, 590, & 591. 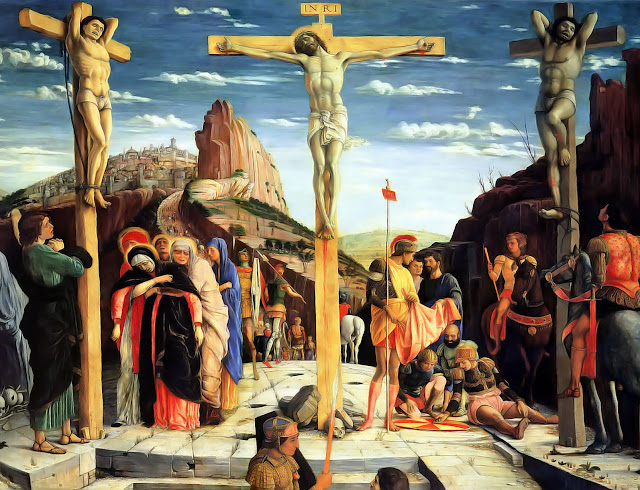 image source
Jesus' "passion" was a horrific experience. He was beaten beyond recognition, publicly mocked, and made to suffer three hours of intense agony nailed to a cross. If the imagination fails to do this scene justice, take some time to watch Mel Gibson's The Passion of Christ. It is the most historically accurate portrayal of these events to date. Be prepared though, this movie contains scenes which are very intense, bloody, and violent.


Who is responsible for the death of Jesus?The passion and death of Jesus cannot be imputed indiscriminately either to all the Jews that were living at that time or to their descendants. Every single sinner, that is, every human being is really the cause and the instrument of the sufferings of the Redeemer; and the greater blame in this respect falls on those above all who are Christians and who the more often fall into sin or delight in their vices (CCCC 117). Also see (CCC 598) for St. Francis of Assisi's take on this.

Why was the death of Jesus part of God's plan?To reconcile to himself all who were destined to die because of sin God took the loving initiative of sending his Son that he might give himself up for sinners. Proclaimed in the Old Testament, especially as the sacrifice of the Suffering Servant, the death of Jesus came about “in accordance with the Scriptures”(CCCC 118).

In what way did Christ offer himself to the Father?The entire life of Christ was a free offering to the Father to carry out his plan of salvation. He gave “his life as a ransom for many” (Mark 10:45) and in this way he reconciled all of humanity with God. His suffering and death showed how his humanity was the free and perfect instrument of that divine love which desires the salvation of all people (CCCC 119).

The crucifixion was and continues to be an integral part of what saves us. This "sacrifice" is the only way man is reconciled with God. In other words, we can't enter heaven without it.