Our Lady of Fatima - A Marian Apparition 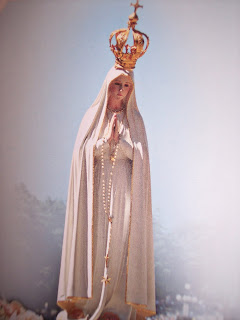 This past Friday we celebrated the feast day of Our Lady of Fatima, a Marian apparition which occurred in 1917 in the small town of Fatima, Portugal (Marian apparitions are appearances of Mary, the Mother of God, to individuals or groups of people). The apparitions of Fatima occurred over the period of six consecutive months, on the 13th day of each month. Mary appeared to three children - Lucia Santos, and Jacinta and Francisco Marto. She delivered a message encouraging the repentance and conversion of sinners. Including the Miracle of the Sun, which was witnessed by thousands on the sixth month of the apparitions, many other miracles have been attributed to this apparition. The Catholic Church has deemed this event as "worthy of belief," and five popes have supported the message delivered as supernatural. This includes Blessed John Paul II, who attributes the saving of his life from a gun shot wound in 1981 to Our Lady of Fatima.

Check out these:
Marian appartion
Our Lady of Fatima